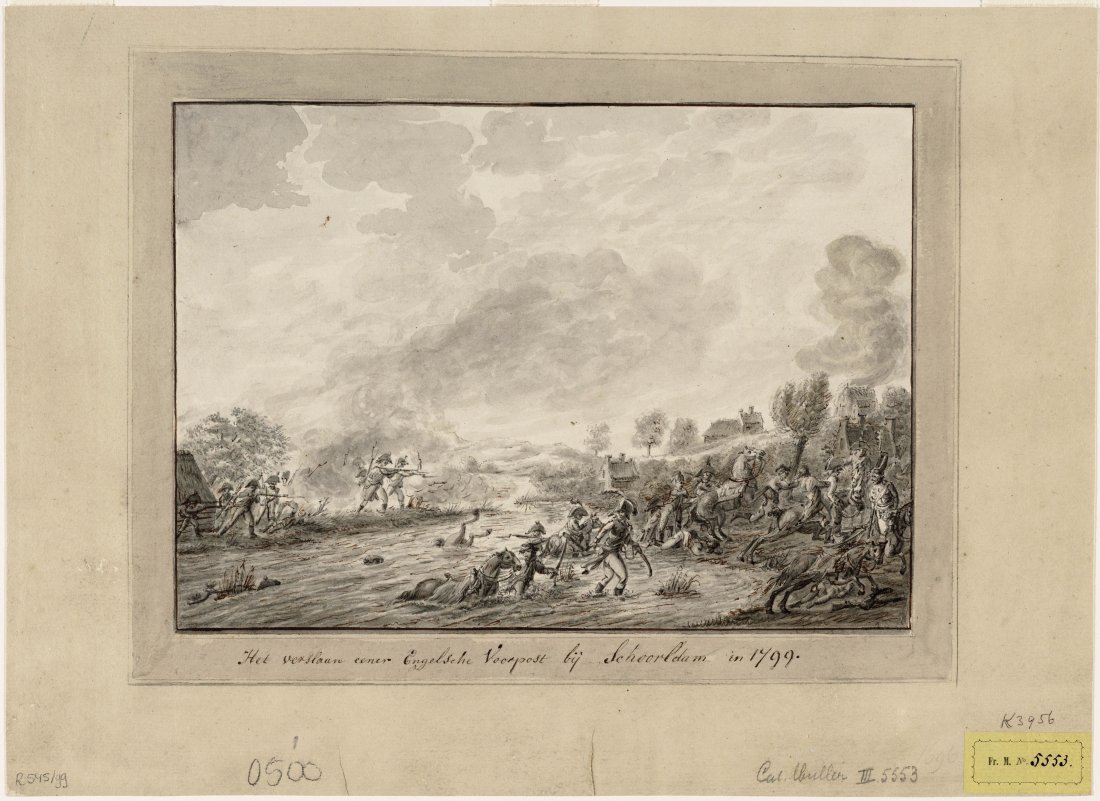 At daybreak the English spotted our advance guard, setting fire to the windmill in front of St. Maarten and opening fire on us with their batteries. On this spot, where the dragoon detachment had to remain in place, we were greeted by the fire of a howitzer of the enemy, which killed four of our horses. A dragoon’s cartridge-box was ignited and this set his uniform on fire. Only his presence of mind saved him, jumping quickly into a ditch filled with water, and the fire was extinguished. In the meanwhile the 1st Lieutenant Hoevenaar ordered his dragoons to close up, at which moment the detachment was hit by a 12-pdr cannon ball, which wounded a horse badly: the horse lost his complete forehead between the eyes and the nose, and it was necessary to shoot the animal. After this had taken place, two guns from the horse artillery arrived, commanded by Captain d’Anguerand. He deployed in front of the dragoons, and the accompanying caisson was placed at the same spot the dragoons were. The dragoons had no other option as to deploy in a new position, left of the road, close to the caisson and a small house, because there was not enough room to deploy properly.

After a short while a shell from a howitzer fell amidst of the horse-team of the caisson and three of the horses were killed instantly. Because we were so close near this caisson, it was lucky that the exploding shell did not hit the caisson itself, because when this would have happened surely the whole dragoon detachment and everyone near it would have been killed. It is commonly known that the terrain, where we fight on in Holland, has narrow roads and is intersected by many ditches and canals, which makes fighting very difficult.

Thus, Lieutenant Hoevenaar of the Batavian Dragoon Regiment describes his participation in the attack on the English positions in the Zijpe on 10 September 1799. His account illustrates that, contrary to the British and Orangist beliefs, the Batavian army was willing to fight for their country and did not run or defect at the first sight of the British. At a certain moment, the British Lieutenant General Abercromby even doubted the outcome of the battle and prepared for re-embarkation. Yet the common British expectation of an easy and victorious campaign was not surprising: years of polarisation between the Patriots and Orangists had divided the Dutch to the bone, not unlike the Democrats and Republicans in today’s USA. These divisions were also the main reason that the French were able to overrun the Dutch Republic easily in 1795, creating the French puppet state called the Batavian Republic. Hearing about the allegedly growing resentment of the Dutch against their French oppressors, a rising en masse of the Dutch population was to be expected.

The campaign had started well enough for the British: although their beach landing was opposed and fiercely contested, the swift capture of Den Helder provided a safe port. The subsequent capture of the Batavian fleet at the Vlieter, without a shot being fired, strengthened their belief that the Batavian Republic was ripe for capture and the reinstatement of the House of Orange. With the British army reinforced by a substantial contingent of the formidable Russian army, the capture of Amsterdam would be a matter of time. As so often, the situation under the surface proved to be much more complex and challenging.

In writing The Secret Expedition I tried to provide the reader with a thorough insight in all this. Treating all nations and armies participating, sketching the political situation and the events leading up to this remarkable campaign, where British and Russians joined forces in an effort to turn the tide against the French rule of a large part of Europe, I studied the battles that were fought, which are described in detail, leading often to a fresh insight contrary to those of previous historians, who often copied supposed facts without challenging them. The text further includes many quotes and accounts to provide the reader with a ‘look and feel’ of how the participants experienced the events during these memorable months, in a campaign during which the reputation of many participants was built or came to an abrupt end.

The new paperback edition of Geert van Uythoven’s The Secret Expedition: The Anglo-Russian Invasion of Holland 1799 is available to order from the Helion website: https://www.helion.co.uk/military-history-books/the-secret-expedition-the-anglo-russian-invasion-of-holland-1799.php